Outdoor Recreation Network > Journals > Stories > 26 > Setting the scene: what do we know about cycling participation?

Numerous articles and studies have proven the benefits of an active lifestyle, including those to be gained from pursuing activities in the outdoors. Recent work undertaken by the Active Living Research department at the University of California and presented in the UK[i] suggested that the benefits of populations being active extend not only to personal wellbeing but also to areas such as the economy, housing prices and education. This research suggested that for every £1 of investment made through interventions promoting walking and cycling, the UK economy could benefit by as much as £19.

This article presents a summary of the key findings from the wealth of data collected on cycling in the UK. Drawing largely on the information collected through Natural England’s Monitor of Engagement with the Natural Environment survey (MENE)[ii], the article examines the profile of those taking visits that involve this activity and the characteristics of such visits. References are also made to data available from other relevant sources that provide context to these findings, including surveys undertaken in Scotland and Wales.

Of course, there are several types of cycling that can be undertaken, with surveys most often recording data for both road and off-road cycling/ mountain biking. Differences in the profile of participants and visit characteristics for these two types of cycling are apparent in survey data and as such, these have been examined separately in this article.

Levels of participation in cycling

Figure 1 below shows the estimated annual number of leisure visits taken to the outdoors in England that included participation in either form of cycling in the period from March 2009 to February 2014. Despite a dip in the March 2010-February 2011 survey year, which reflects a general decrease in outdoor recreation participation for that period for all types of visits, the annual visit estimates for both off-road cycling/ mountain biking and road cycling rose to their highest level for the past five years in 2013/14 (35.7 million and 72.8 million respectively). Overall, between 2009/10 and 2013/14, the estimated number of visits involving road cycling rose by 8.3 million while the estimated volume of visits that included off-road cycling/ mountain biking increased by 1.4 million over the same period.

Furthermore, between 2011 and 2014, an estimated 6.4 million domestic tourism trips taken away from home[iii] included cycling on a road or surfaced path and around 1.6 million included mountain biking as one of the activities undertaken during the trip. While the proportion of all trips recorded that included these activities is small, the data suggests an increase over this period from 1.2m trips including road cycling in 2011 to 1.9m in 2014[1].

The Active People Survey[iv] undertaken by TNS on behalf of Sport England has also recorded a general increase in cycling participation, be this for training or recreation, indoor and outdoor. For example, the number of adults (16+) who participated in cycling of ‘rigorous intensity’ for 30 minutes or more at least once a week increased significantly between October 2005-2006 and April 2014-March 2015 from 1.7 to 2.1 million.

Throughout the 2009 to 2014 period, MENE has consistently recorded that men are more likely than women to take visits to the natural environment involving any type of cycling. This corresponds with several other studies which record leisure cycling participation including the 2014 Welsh Outdoor Recreation Survey (WORS)[v] and Scotland’s People and Nature Survey (SPANS)[vi] where around 7 in 10 visits where cycling was undertaken (road or off-road/ mountain biking) were by men. The same pattern can be seen for tourism visits involving cycling, particularly off-road/ mountain biking, as recorded in the Great Britain Tourism Survey (GBTS)ii. * Due to sample sizes, data for SPANS has been presented for any visits including cycling

Beyond recreation, the National Travel Survey[vii] also recorded higher participation in cycling amongst men – the average number of cycling visits taken by men living in England in 2013 was over three times as many as the average amongst women.

For both general leisure and tourism visits, cycling participation has tended to be highest amongst those between the ages of 35 and 54[2]. In addition, visits taken for either leisure or tourism purposes that involve cycling were generally more likely to be taken by those in paid employment, those with access to a car[3], those in the higher ABC1 social grades[viii] and those living in the least deprived areas[4].

How do participant profiles vary by the type of cycling undertaken?

Several surveys have recorded a higher proportion of those aged 55 and over amongst road cycling participants while the data suggests a younger age profile for off-road cycling/ mountain biking. For example, around a quarter of visits recorded through MENE (2009-2014) where road cycling was undertaken (24%) were taken by those aged 55 and over, as were 17% of tourism visits taken between 2011 and 2014 by residents of England.

Several variations by type of cycling undertaken were evident when looking at the MENE data for the first five years of the survey that were not evident for the surveys in Scotland and Wales or for the tourism visits covered by GBTS. MENE collects data on a large volume of visits per year and therefore, the cumulative dataset allows a greater interrogation of the data than is possible for other surveys.

Table 1 – Variations in profile by cycling type (MENE data, all years, % of visits) Visits where off-road cycling/ mountain biking was undertaken were more likely to be taken by those between the ages of 35 and 54, those in paid employment and those with children in the household. While car access was high amongst participants of both forms of cycling, a higher proportion of visits involving off-road cycling/ mountain biking were taken by those with access to a car than was the case where road cycling was undertaken.

What do we know about cycling visits?

As well as understanding the volume of visits and participant profiles, it is beneficial to understand the characteristics of visits on which cycling has been undertaken.

While the majority of visits involving cycling recorded by MENE were taken to the countryside, this was significantly higher for visits where off-road cycling/ mountain biking took place, while visits to greenspaces in towns and cities were more likely to involve road cycling. At the overall level, visits to towns and cities have risen significantly over the years, as has the annual volume of visits involving road cycling mentioned previously. Across both forms of cycling, the vast majority of leisure visits began at a person’s home. However, a higher proportion of visits involving off-road cycling/ mountain biking recorded through MENE were taken from holiday accommodation than was the case for road cycling. Coupled with an increased likelihood to take visits to countryside locations, visits where off-road cycling/ mountain biking were undertaken were more likely to involve the use of a car to reach the visit destination, although the majority were reached by bicycle.

Visits that included off-road cycling/ mountain biking were also more likely than those involving road cycling to include any financial expenditure during the visit (63% compared to 39% in road cycling visits) with an average of £8 spent during these visits (compared to £6 for visits including road cycling). This expenditure was most likely to be spent on food and drink (32%). In light of the increased likelihood of a car being used in order to reach the visit destination, visits involving off-road cycling/ mountain biking were more likely to involve money being spent on fuel and/or car parking (10% each)[5].

Figure 4 Reasons for visiting the outdoors – proportions of visits by form of cycling (MENE data all years, %) 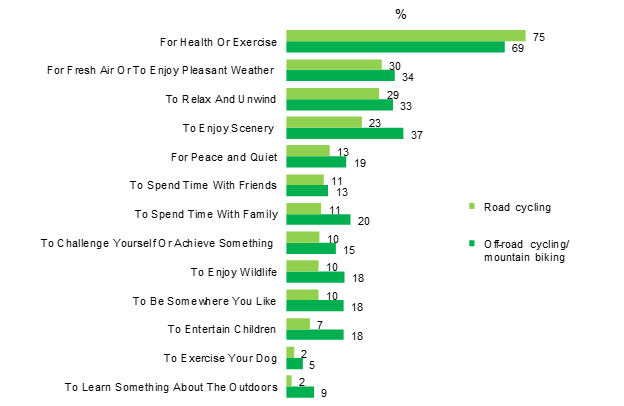 As shown in Figure 4 above, MENE recorded that health or exercise was a key motivation for visiting the outdoors on visits where either form of cycling was undertaken, with an average across all five years of three-quarters of road cycling visits and around 7 in 10 off-road cycling/ mountain biking visits taken for this reason. The range of motivations for off-road cycling/ mountain biking was greater with these type of visits more likely to also be taken to enjoy scenery/ wildlife, to spend time with family (including children) and/or to visit a destination the participant particularly likes.

Inclusion of any form of cycling in tourism trips (as recorded for GBTS) was far more likely when the trip was taken for holiday purposes rather than to visit friends and relatives, with a fairly even split between shorter visits (1-3 nights) and those taken for a longer period (4 or more nights). The GBTS survey data indicates that self-catering accommodation options were more likely to be selected on trips where cycling was undertaken, potentially due to considerations such as location, the practicalities of storing equipment etc.

In summary, the benefits of promoting an active lifestyle are well proven and reach beyond the individual to benefits that can be felt by society as a whole. With regards to cycling, it is important to understand who currently participates and what they do on visits involving this activity. This understanding will not only help in facilitating those who already participate but can also help in encouraging other currently under-represented groups, for example women, to take part.

It is also important to bear in mind that cycling on roads/ paths and off-road cycling/ mountain biking are indeed separate activities. The variation in participant profiles and visit characteristics mean that the differing needs and behaviours of those participating in each of these cycling forms need to be taken into account, both when visiting from home and while on holiday.

[1] Please note that the proportion of trips reported that included cycling is relatively low and the data quoted should be treated as indicative. In addition, due to the small sample sizes for trips taken by residents of Scotland and Wales, the data presented in this article refers to trips taken by those resident in England only for trips taken in England.

[2] Data based on MENE and GBTS surveys

[3] Data based on MENE, WORS, GBTS and SPANS surveys

[4] Data based on MENE, SPANS and GBTS surveys

[5] It is important to note that it is not possible from the data available to determine what level of the money spent can be attributed to the visit itself, therefore, expenditure is discussed in terms of money spent during rather than on the visit.

[ii] NATURAL ENGLAND (2015), ‘The Monitor of Engagement with the Natural Environment (MENE)’, [ONLINE]. Last accessed on 18 August 2015 at URL: https://www.gov.uk/government/collections/monitor-of-engagement-with-the-natural-environment-survey-purpose-and-results

[iii] Data from the Great Britain Tourism Survey (GBTS) for 2011-2014 used with permission from the survey sponsors. The survey as a whole is jointly sponsored by VisitEngland, VisitScotland and Visit Wales. For more information, contact VisitEngland (VEResearch@visitengland.org); VisitScotland (Chris.Greenwood@visitscotland.com) or VisitWales (Robert.Lewis@Wales.GSI.Gov.UK)